They're over the moon

The crowd that gathered Saturday at White Rock Lake couldn't see the full moon, but they serenaded it anyway. 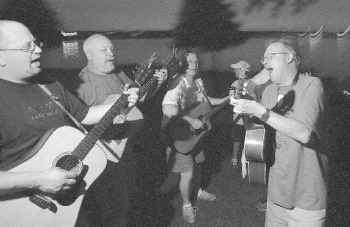 From left: Fred Garza, Jeff Carr, Alan Litt and Tom Cherry sang 'By the Light of the Silvery Moon' on Saturday at White Rock Lake to celebrate June Moon. The annual gathering, started in 1979, marks the full moon closest to the summer solstice.

For 29 years, people have been gathering near T.P. Hill to celebrate June Moon – the full moon closest to the summer solstice. Traditionally they croon their own adaptation of "By the Light of the Silvery Moon" as they watch the moon rise over the water.

So even though clouds obscured this year's view, event founder Tom "Tomcat" Cherry knew just about when to start directing his makeshift chorus.

"I've never had a bad June Moon," John "Red Dog" Young said. "Every one is different and every one is terrific."

Mr. Cherry started the annual gathering in 1979 by asking friends to picnic and watch the moonrise. The next year he sent out a few hundred invitations, and a tradition was born.

"It basically hasn't changed since the very first year," Mr. Cherry said. "Many of the people who were at the first one still come."

The invitations themselves became integral to the event. Over the years, they've been crafted by Mr. Cherry, his friends, professional artists and children. This year Mr. Cherry hand-painted each one with a brush technique reminiscent of Japanese art.

"It's a labor of love, but sometimes it's more labor," he said.

The Moonies gather about 6 p.m. for a picnic. After the sing-along, musicians in the group perform a jam session.

The organizers fretted a bit this year about the weather. But the rain eased just as people started arriving. Those who stayed late even got a peek at the moon, thanks to what Mr. Davis dubbed a "meteorological miracle."

"I think our combined will made the clouds part," he said. "It turned out to be a great one."

The crowd's size varies from year to year – sometimes a few hundred people, other times just a few dozen regulars. A generation of young Moonies has grown up, and now they bring their own children.

"I think there are 40 to 50 diehards who would show up even if a tornado was out there," Mr. Young said. "It's sort of like a family reunion for a lot of us. We see people we only see once a year."

Mr. Young views June Moon as a time to connect with nature and recognize life's joys. Mr. Davis likes thinking about what the moon meant to ancient cultures before humans truly understood what it was.

"We all get real romantic and stupid when the June Moon comes around," he said.

Mr. Cherry has his own ideas about revering nature and honoring the moon's impact on people. But he prefers to let everyone decide for themselves what June Moon is about.

"My main obligation is just to tell everyone when it is," he said. "It's an easy party to throw."

Anyone is welcome at the event. Mr. Cherry said he no longer knows a majority of the participants. He would even like to see June Moon evolve into something outside his control.

"I wish I could almost give it away," he said. "I wish it would be something where people just looked at the calendar and showed up."